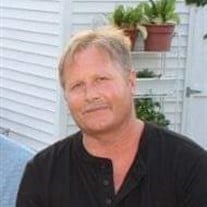 Brad's service can be viewed here: https://vimeo.com/658629722 Brad Flaagan, 59, Son, Brother, Uncle, Father and Friend (confidante) passed away unexpectedly in his home in Moorhead, MN, on November 23, 2021. Brad was born April 11, 1962, in Fargo to A. Kenneth and Constance (Connie) Flaagan. The youngest of five children, Brad grew up in North Fargo, attending Longfellow Elementary, Ben Franklin Junior High, and graduating from Fargo North High School in 1980. He attended NDSU. He attended and was confirmed at Messiah Lutheran Church. He was involved in sports growing up, playing baseball, whiffle ball and football with the other 24th Avenue kids. There was always a game happening on the block. Brad was an entrepreneur from early in life. He had multiple businesses including a resort on Big Detroit Lake, MN. He owned and worked hard at his current business, Brad Flaagan Painting, until his death. Brad married Kelly Harrop and they later divorced. Brad remained close to her children, Jay, Phillip and Justin Fox and Kristin Collins. He especially was close to Jay; they worked together and had a special bond. He considered himself a Grandpa to Kristin’s son, Mac. Brad was a sensitive man, kind, gentle and caring. He loved animals, kids, old movies, and his family, always showing up with a thoughtful gift when any of us moved into a new place. He never raised his voice, even to his dogs! Brad’s family meant everything to him, the walls of his home were covered in family photos, old and new. Brad was preceded in death by his father, A. Kenneth, brother Randy and nephew Aaron Richardson. Survivors include his mother, Connie Flaagan, Fargo; brothers, Bruce, San Diego, CA, Craig (Cheryl) The Villages, FL; sister, Michelle (Grant) Richardson, Fargo; nephews, Nick (Kelly) Richardson, Excelsior, MN, Erich (Sally) Richardson, Fargo, Jordan Richardson, Fargo; nieces Megan (Levi) Richardson and Kari Flaagan, Fargo; stepchildren, Jay, Phil and Justin Fox and Kristin Collins and their families.

The family of Bradley Paul Flaagan created this Life Tributes page to make it easy to share your memories.

Send flowers to the Flaagan family.