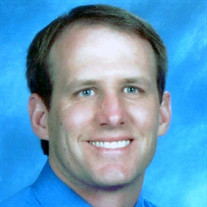 Brad's memorial service can be viewed here: https://vimeo.com/513460279 Brad's Tribute Video can be viewed here: https://www.tributeslides.com/tributes/show/B38SSX4R33MWW7JR Brad Bosch, #21, of Fargo died on December 10, 2020 at 50 years old. Bradley Craig Bosch was born to Betty (Deisz) Picard and Harvey Bosch in Cedar Rapids, Iowa on December 12, 1969. Brad was an ugly baby, which led to a lifetime of his Grandpa Matt calling him, “Ugly Kid.” However, he quickly became adorable and learned his smile could get him out of trouble. Brad’s younger years were spent terrorizing his siblings, first in Minot and then in Bowbells, ND. Bowbells forever remained a special place in his heart. In high school, Brad played every sport. After high school he played football at Northland Community College in Thief River Falls, MN, and earned a criminal justice degree. Brad met Dixie Koskela in 1994. Brad’s favorite past-time quickly became making Dixie laugh. They were married on October 19, 1996. On January 5, 2001, Brad and Dixie welcomed their first son, Conner Craig Bosch. Conner looks like his dad but luckily got his mom’s sensibility. On April 9, 2004 Brad and Dixie welcomed another son, Regan Arlan Bosch. Regan inherited his dad’s silly personality. Brad took the role of father seriously. Although he taught all his nieces and nephews naughty things, he was determined to raise good kids. He loved watching his boys play sports and coached them in many of their activities. He enjoyed taking Conner and Regan to Redhawks and Bison games, and their family also went on many memorable vacations. Over the last couple of years, Brad shared his passion for biking with Regan. Brad was born a salesman and worked for Airgas for the last 16 years. Brad also had many interests. He ran multiple marathons and many half-marathons. He was a member of the NDSU Team Makers, as well as many running and cycling groups in Fargo. Brad was passionate about biking and grooming trails – the Maah Daah Hey, Cuyuna, and Wildwood Park trails were some of his favorites. Brad was unlike anyone. You never knew what trick he would play to get a laugh. He was goofy but incredibly kindhearted. If someone was in need, Brad was there to help. He loved deeply and whole-heartedly and was loved beyond measure. Brad is survived by his sons, Conner and Regan, and his best friend, Dixie, all of Fargo; his mother, Betty (Frank) Picard of Barnesville, MN; his father, Harvey Bosch of Bismarck; his siblings, Scott (Wendy) Bosch of Victoria, MN; Jessica (Jon) Klein of Bismarck; Ashley (Dan) Seykora of Rugby; his stepbrother, Bob (Tara) Picard of Portland, Maine; and his stepfather, Don Hansen of Bismarck. All nine of Brad’s nieces and nephews will also miss their favorite uncle, as will his aunts, uncles, cousins, and friends. Brad is preceded in death by his maternal grandparents, Matt and Rose Deisz; his paternal grandparents, Joe and Jenny Bosch; his aunt, Veronica Deisz; his cousin, Derick Deisz; his stepbrother, Jim Picard; and his stepmother, Joy Bosch. To anyone out there that is hurting, please talk to someone. If you have a plan to or are considering harming yourself, call the Suicide Prevention Hotline: 1-800-273-8255. In lieu of flowers, memorials may be made to the “Brad Bosch Memorial Fund”, mailed to Gate City Bank, 3100 25th Street South, Fargo, ND 58104. This will be dedicated to Brad’s sons, Conner and Regan Bosch, for their future educations. A Private Prayer Service will be livestreamed here at 7pm on Wednesday, December 16, 2020: https://vimeo.com/490168643 The Memorial Service will be at 2pm, Thursday, December 17, 2020 at Hope Lutheran Church - South Campus, Fargo, ND and will also be livestreamed here.

The family of Bradley Craig Bosch created this Life Tributes page to make it easy to share your memories.

Send flowers to the Bosch family.