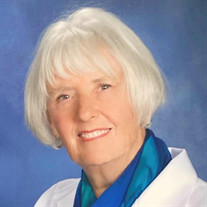 Beverly was born in Dickinson, ND and moved to Bismarck as a baby. She lived there until she graduated from Bismarck High School in 1955. She then moved to Fargo where she attended North Dakota Agricultural College where she met Richard Woodward. They were married and had three children. She and her husband started the Woodward Adjustment Company which did very well for seven years. Dick was then invited to become an agent with Dawson Insurance and Bev had more time to spend with her kids and concentrate on her volunteer career. She was President of Junior League of Fargo Moorhead, Fine Arts Club, LaSertoma, Epsilon Sigma Alpha, and Chairperson of the First Congregational Church Centennial celebration. She was also on the boards of the Campfire Girls, Fargo Moorhead Area Arts Foundation, Fargo PTA, Lake Agassiz Arts Council, and a member of Chapter AE PEO. They spent their summers at Lake Melissa and she enjoyed playing racquetball, golf, tennis, and bridge, and later in life Mahjongg. In 1994 she decided to try the retail world and became the assistant gift shop manager at City Center in Fargo. In 1986 she was hired to develop and manage the Heritage Shop in the Heritage Hjemkomst Interpretive center. In 1989 the Board of Directors hired her as the Executive Director and she held that position for over ten years. Professional affiliations included the Regional Museum Store Association, Minnesota Council of Nonprofits, Fargo/Moorhead Chamber of Commerce, American Association of Museums, and the Midwest Association of Museums. Richard Woodward passed away in 2002. In 2009 she married family friend, Lloyd Thompson. They had a wonderful life together living in Fargo and spending summers at the lake and winters in Arizona, as well as taking many trips around the world. Their lives were enriched with the love of both their families and friends. She is survived by her children: Cindy Bonzer (Jon), Grand Forks, Marsha Johansen (Brian), Fargo, David Woodward (Sarah Fliss), Savage, MN, her grandchildren, Matt Bonzer (Annie Mohn), Melissa Bonzer, Erika Whelan (Paul), Vanessa Johansen, James Johansen, Michael, Katie and Chase Woodward, great grandchildren Lydia, Jocelyn, and Violet Whelan. She is also survived by her step children Brenda Shepard (Steve), Dan Thompson (Genevieve) and Nancy Slotten, step grandchildren, Jillian Cazares (Jose), Megan Swanson (Aaron), Jeremy Shepard, Brad Shepard, Ian Thompson, Daric Thompson, Dylan Slotten (Rachelle), Lukas Slotten, and Roger Shepard (Angella), along with step great grandchildren Albie Cazares, Declan Slotten, Ryleigh Slotten, Jaron Swanson, Breven Swanson, Keithen Shepard, Cason Shepard, and Reid Shepard. Sister in laws Dawn Tyson, Elaine Tyson, and Barb McDowell, nieces and nephews Vicky Williams (John Oren), Kim Tyson, Rodney Tyson, Georgia Hendrickson (Terry) Becky Laatch (Art) and Cassie Shimota. She was preceded in death by her parents, George and Ettie Tyson, Step mother Lorna Tyson, husbands Dick Woodward and Lloyd Thompson, brothers Bob Tyson, Ed Tyson, and nephew Keith Tyson. A private burial will be held at Lakeside Cemetery in Detroit Lakes on Friday, May 8th at 2:00. A celebration of life will be planned for a later date. The family prefers memorials to be directed to the Lake Melissa Sallie Association or to the FM fine Arts Club. Memories and condolences may be shared at www.hansonrunsvold.com. Arrangements by Hanson-Runsvold Funeral Home Fargo, ND.

Beverly was born in Dickinson, ND and moved to Bismarck as a baby. She lived there until she graduated from Bismarck High School in 1955. She then moved to Fargo where she attended North Dakota Agricultural College where she met Richard... View Obituary & Service Information

The family of Beverly Jean Thompson created this Life Tributes page to make it easy to share your memories.

Beverly was born in Dickinson, ND and moved to Bismarck as a...