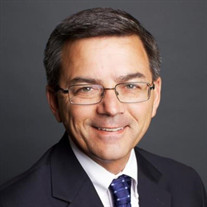 Barry's funeral service will be livestreamed at 11:00 AM on Friday March 26 at the following link https://boxcast.tv/view/barry-schuchard-funeral-blbbxxahuzfcw2nsavxm Barry's KLJ Tribute can be viewed at the following link. https://fb.watch/4r3jyPNdfm/ Every now and again, you meet a person who lives life with an uncompromising knowledge that each day is to be appreciated, meaningful, and truly experienced. This is how Barry Schuchard lived, and while his life on earth ended too soon, that enthusiasm and passion for living will carry forward through the lives of his family, friends, and those who were fortunate to know him. On March 22, 2021, Barry passed away peacefully surrounded by family and loved ones. Barry K Schuchard was born September 1, 1960 to Lyle and Charlene (Werre) Schuchard in Linton, North Dakota. Growing up, Barry was hard working, athletic, and occasionally found some trouble to get into on a Friday night. Barry was so proud of his family and the strong, connected bond they all shared. In 1997, Barry and Sue married and built a beautiful life together with their beloved children, Adam, Jennifer, Brittney, and Rylee. They first lived in Valley City, then West Fargo, also spending many hours together on Middle Cormorant. Barry’s bond with Sue was extraordinary, he would often admit she really ran the show and how fortunate he was to have her in his life. He was quick to tell a story about the kids, brag about their accomplishments, and recognize the people they all continue to grow into. He delighted in spending time with all his kids and grandkids at their home or at the lake, in the chaos of young kids playing, or the pride in watching Rylee surf behind the boat. A proud North Dakota State University alumnus (Go Bison!), Barry graduated with a Bachelor of Science degree in civil engineering. This would lead to a career of nearly four decades with engineering firm KLJ. He joined the firm in 1983 and spent his career working on infrastructure projects across the upper Midwest. Most recently, Barry served as CEO of the company. In any role Barry held, he found the greatest joy in mentoring up-and-coming professionals and checking in on projects. His KLJ family was blessed with his devotion to the success of the people he worked with. He had a communication style all his own – encouraging, stern, and motivating. Barry often said his career started all because someone took a chance on him, and he, in turn, took a chance on many. The engineering industry is better for his time as part of it. We cannot tell the story of Barry’s life without mentioning two additional passions – sports and those classic cars! When it came to sports, Barry had a passion for his favorite teams and ravenously followed the Celtics, Twins, Packers, and of course, his beloved NDSU Bison. Barry wore his love for NDSU Bison football like a badge of honor. Tailgating and bus trips for Bison games became a yearly pastime with Barry at the helm. In 2013, a perfect Bison season was bookended by two unforgettable bus trips to Manhattan, Kansas and Frisco, Texas. And the cars. It must have been part of why he loved engineering infrastructure and all the bridges and transportation projects – helping build new places to drive the cars. His favorites were his ‘67 Camaro and his 2017 ZL1 Camaro. Above all, Barry was a man of strong faith and conviction. Committed to building a life worth living, He made sure everyone around him knew he was there to support, encourage, and push. He did not settle for anything less than our best, and as we move forward as family and friends without him, we will carry that passion and conviction in each of our days. Barry is survived by his wife of nearly 24 years, Sue and their children Rylee, Adam (Amanda) Kelley, Elsie, Lyla – Fargo; Jennifer (Jarryd) Phillips, Finn – Franklin, MA; Brittney (Ryan) Hoverson, Kora, Leroy – West Fargo. Barry is also survived by his parents, Lyle & Charlene Schuchard, siblings Rick, (Gale); and Tracey (Dave) Famias, sister-in-law Barb (Paul) Henke, brother-in-law Jim (Donna) Kelly, a multitude of nieces and nephews, and his KLJ family. Preceded in death by his grandparent's Art & Emma Werre, Leonard & Millie Schuchard, in-laws Ruby & Earl Kelly, Mike Kelly, and Bob Kelly. In lieu of flowers, the family asks that memorials and donations be made to the NDSU Foundation or Red River Zoo Future Bison Exhibit. Barry's Tribute Video can be seen and copies ordered here: https://www.tributeslides.com/tributes/show/SPZHMRK8K4779ZM4

Barry's funeral service will be livestreamed at 11:00 AM on Friday March 26 at the following link https://boxcast.tv/view/barry-schuchard-funeral-blbbxxahuzfcw2nsavxm Barry's KLJ Tribute can be viewed at the following link. https://fb.watch/4r3jyPNdfm/ Every... View Obituary & Service Information

The family of Barry Schuchard created this Life Tributes page to make it easy to share your memories.

Send flowers to the Schuchard family.