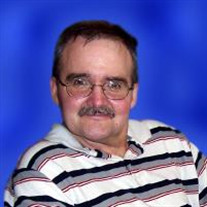 Barry's service will be livestreamed here: https://vimeo.com/493371434 Barry's Tribute Video can be viewed here: https://www.tributeslides.com/tributes/show/2XYJD9S9SYGHYFLH Barry Ellison, 66, of Fargo, ND, passed away on December 15th, 2020. Barry was born on February 22nd, 1954 to Walter and Gloria Ellison. He was raised in Valley City, ND, by Gloria and Harvey Adams. During his elementary years, he was a member of Boy Scouts of America and attended the Boy Scout’s Jamboree in 1969. Barry graduated from Valley City High School in 1972. His first job was at Strauss Clothing store in Valley City. He received a letter from Herman Stern, owner, upon graduation commending him on his excellent achievements. After graduation, he traveled through Europe. Shortly after, he attended NDSU School of Pharmacy. He was a member of Kappa Psi fraternity. He graduated with his Doctorate Pharmacy Degree. He worked in Fargo, ND as a pharmacist at Medical Pharmacy for 17 years. He was an avid bowler, obtaining numerous trophies during his league bowling years. He enjoyed music and comedy. Attending Jay Leno in person was his most recent adventure. He enjoyed his membership with Sons of Norway. He was a passionate NDSU alumni and Bison football #1 fan watching every game. Barry married Susan in 1976 in Valley City, ND. Together they raised three beautiful girls, Megan, Tara, and Hilary. They started their lives together in West Fargo, ND, and remained there throughout the years. Megan, Tara, and Hilary currently remain in the area. Barry was a member of Faith Lutheran Church in West Fargo. He enjoyed attending services and socializing with others over coffee and treats after services. He involuntarily retired from his profession in 1996 due to his diagnosis of Multiple Sclerosis. He lived at Sheyenne Crossings in West Fargo, ND, from 2013-2020. He enjoyed making everyone laugh. He was a comedian at heart. He enjoyed visiting with all that met him. Even though he had a great many obstacles in life, he never was bitter or hateful. He showed the world what it was like to be kind, caring, generous, and to live with a full heart. Barry was loved by so many and will be missed by all those who had the pleasure to cross his path. Barry is preceded in death by his parents. He is survived by his children Megan Theisen, Tara (Wendy) Geller, Hilary (Matt) Crosby; his grandchildren Jocelyn, Presten, Jace, Kade, Harvey, and Miranda; his sister Julie (Del) McCoy; Nephews Randy McCoy, Rick (Wendy) McCoy and Chad McCoy. Nieces Tracy (Todd) Spencer and Tiffaney (Jeff) Weideman. A special thank you to his amazing caregivers at Sheyenne Crossings in West Fargo and Vicki Berg, his long-term personal care attendant, who will always hold a special place in his heart.

The family of Barry Heglie Ellison created this Life Tributes page to make it easy to share your memories.

Send flowers to the Ellison family.