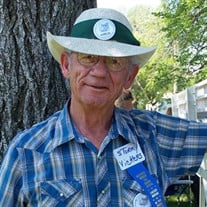 Stormy's Funeral Service will be livestreamed here: https://vimeo.com/549001827 Stormy's Tribute Video can be seen and copies ordered here: https://www.tributeslides.com/tributes/show/45LF5KM2LXRC9W2T Arthur Albert Storm (Stormy) Vickers lived part-time in his son’s basement on a lake in Minnesota and part-time in the sunshine of Arizona. On May 2, 2021, Stormy succumbed to complications from the insidious Alzheimer’s disease while passing through Grants, New Mexico. He was able to spend his last moments with his wife and two of his sons. He was, as always, loved by all who met him. Stormy was born in a one-room shack on the North Dakota side of Fairview, Montana, on July 13, 1942. He was the first child born to Arthur and Vera Vickers, who went on to have four more boys: Vance, Darvel, Byron, and Roger (1981). Stormy and his brothers were likely terrorizing the countryside every day growing up, from catching frogs in Charbonneau Creek to playing old west games in the hills to hitching a ride from Cartwright to Fairview on the “Goose.” Throughout his life, he had many jobs and traveled the country (and very briefly the world) searching for oil with a seismograph, selling farm magazines, driving a beet truck, working in the oil field, and many other things. His favorite job, however, was in maintenance at Fairview High School, where he was always surrounded by kids. Stormy loved people. He was always among the first to arrive at church and among the last to leave, mostly because he loved talking to people: before, during, and after. When traveling with Stormy, even when seven states away from home, he impossibly would run into people whom he knew or knew him. It truly was astonishing to be trying to load the car while on vacation in Utah, only to find Stormy 35 minutes late because he was catching up with a long-lost acquaintance he ran into at the diner. Astonishing. At this very moment, his family is certain that Stormy is talking someone’s ear off, swapping meaningless stories — the ones that, in the end, always seem to mean the most. Stormy was always collecting things. Sometimes useful, sometimes not. He had an extensive tool collection and was always forgetting to whom he had loaned his tools. More recently, he had an exhaustive walking stick and rock collection. He did not loan out his walking sticks or rocks. He loved watches, old music, and old cars. He was always busy, working hard, and most importantly, doing anything and everything in his power to help anyone in need. In more recent years, Stormy loved being at the lake with family, especially with his grandkids. Even when his disease progressed to the point where he didn’t remember the names of his sons or wife, he still recognized his grandkids — and boy did he light up every time they were around. Stormy is survived by his wife, Kathy; his sons, Jeff (Peggy), Matt (Kim), Stormy (Becca), and Andy (Jen); his grandchildren Onesti (Brett), Morgan (Mason), Taylor (Azhia), Shay (Aaliyah), Austin (Alyssa), Bridger, Reece, Rhett, Julia, Kellen, Asher, and Mckenna; his step-grandchildren Derek (Aubrey), Jordyn (Grant); his great-grandchildren Xavier, Isaac, Benson, Brooks, Jax; and his brothers Vance, Darvel, and Byron. Meaningless stories will be shared at a reception following the service.

The family of Arthur Albert Storm Vickers created this Life Tributes page to make it easy to share your memories.

Send flowers to the Vickers family.