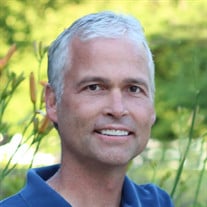 Anthony (Tony) C. Hanson, 50, passed away peacefully surrounded by his children, mother, and special friend, Lisa Marie Swanson, on July 11, 2019 after a courageous battle with cancer. Tony was born February 1, 1969 to E. Charles and Mavis (Smith) Hanson in Fargo, ND. Tony grew up in Fargo and graduated from South High in 1987. He attended Ambassador College in Texas for two years and he earned a BA in Industrial Engineering at NDSU in 1993. He worked in Fargo as an engineer at several manufacturers and was working for Caterpillar at the present time. Tony married Lisa Satermo in 1992 and together they had one son, Jacob. Tony married Wendy Barta in 2001 and Allison and Ashton were added to his family. Tony lived and worked in England for several years while working for Caterpillar. He loved time spent at the lake, DIY projects, and most importantly, spending time with his family and friends. He was preceded in death by his father, E. Charles Hanson. He is survived by his mother, Mavis; children: Jacob Hanson, Allison Barta, and Ashton Barta, all of West Fargo, ND; siblings, Van (Polly) Hanson, Lynchburg, VA and Andrew (Lisa) Hanson, Medina, MN; nieces and nephew, Sarah, Amanda, Aspen, and Sam Hanson. Memorial service will be at 1pm, Tuesday, July 16 at Hanson-Runsvold Funeral Home, Fargo. Visitation will be one hour prior to the service.

The family of Anthony (Tony) C. Hanson created this Life Tributes page to make it easy to share your memories.