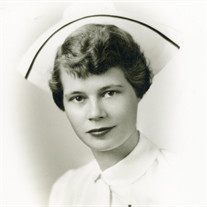 Annette Zoe Gjesdahl, age 87, Fargo, passed away peacefully October 6, 2019. Her family is grateful for the care she received most recently at Bethany on University, from Ethos Home Care and Hospice and also, in the last two years, by the staffs of the Roger Maris Cancer Center and senior living center, Edgewood in Fargo. Born Annette Malzahn on May 30, 1932, in Minneapolis, Minnesota, she was raised during hard years, the Depression and World War II. Like those of her time, she never complained of it. She came from sturdy stock who simply handled what came their way. In life, and as death drew near, Annette leaned hard on the love and laughter of siblings Ray, Mike, Rich, Mary, John, and Sally, a primary circle of life-long support. Annette was a nurse’s nurse. She graduated from St. Barnabas School of Nursing in 1953 in Minneapolis, then took her first job at Bethesda Hospital (later Riverview Hospital), in Crookston, Minnesota. Annette married Lee A. Gjesdahl on July 17, 1955, in East Union, Minnesota. They made their home, and enduring friendships, in Crookston, moving to Fargo in 1975. The mother of a Down Syndrome child, Annette was the President of the Polk County Association for Retarded Citizens. She helped conceive and create the Polk County Day Activity Center, a day center for those with Down Syndrome and other similar challenges who live in and around Crookston. She was its first Chairperson. She was also the President of Crookston’s Mrs. Jaycees. Annette began her nursing career catching babies in the OB ward. In 1973, the Director of Nursing position came open and, to her surprise, she was asked to fill it. In 1975, she became the Director of Medical-Surgical Nursing at St. Luke’s Hospital (later Meritcare). A few years later, she obtained her Master’s degree in Nursing Administration from the University of Minnesota. Annette became the President of the North Dakota Association of Nurses which, in 2012, gave her a lifetime service award for advancing the nursing profession in North Dakota. Her years as a nurse created yet another circle of enduring friends and colleagues. Annette is survived by daughter, Leslie Beers (Hank), of Naples, Florida; son, David, of Crookston, Minnesota; son, Mike Gjesdahl (Sara) of Fargo, North Dakota; and grandchildren, Emma Gjesdahl, Noah Gjesdahl, and Sophie Gjesdahl, all of Fargo, North Dakota. She wished dearly to see Emma’s marriage this December to Mitchell Gullickson, but her lasting love will be present that day. Funeral services for Annette will be held at 11:00 a.m., Friday, October 11, 2019, at First Lutheran Church, in Fargo. The service will be preceded by a visitation beginning at 10:00 a.m. Annette was preceded in death by her parents, Arnold and Inez Malzahn, her husband, Lee, and her sister, Mary.

Annette Zoe Gjesdahl, age 87, Fargo, passed away peacefully October 6, 2019. Her family is grateful for the care she received most recently at Bethany on University, from Ethos Home Care and Hospice and also, in the last two years, by the staffs... View Obituary & Service Information

The family of Annette Zoe Gjesdahl created this Life Tributes page to make it easy to share your memories.

Send flowers to the Gjesdahl family.