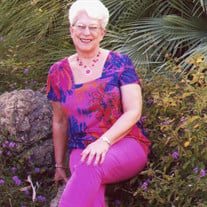 Angie’s service can be viewed here: https://youtu.be/JcvVHMJZ4hI Angela Marie Steinwand Peda went to meet her Savior on August 2, 2021. She completed her long journey with ALS which was diagnosed in December of 2010. Angela was born in her parents' home in Merricourt, ND on April 2, 1946. She was baptized at Peace Lutheran Church in Merricourt and was confirmed in the Missouri Synod Lutheran Faith. She completed grade school in Merricourt in 1960. She attended Edgeley High School and graduated in 1964. After that, she attended college at North Dakota State University in Fargo, ND. She graduated in 1967 with a BA Degree in Sociology and Psychology. Angela's first job was with Stutsman County Social Services in Jamestown, ND, where she worked as a case manager for the aged, blind and disabled between 1967-1969. On August 23, 1969, Angela married Raymond Peda at Zion Lutheran Church in Edgeley, ND. They moved to Fargo, ND. In Fargo, Angela worked for Lutheran Social Services between 1969-1972 as a case manager for unwed mothers. On March 25, 1972, Ray and Angie had their first child, son, Chad Peda. Angie discontinued working for a period of time to raise her children and care for her family. On June 5, 1974, their daughter Kari Ann was born. In 1978, Angie returned to work part-time for Lutheran Social Services working with adoption and foster care. In 1979 she began working for South Eastern North Dakota Community Action Agency (SENDCAA) as an Outreach Coordinator doing advocacy for low income people. In 1981, she began a 30 year career working with private rehabilitation companies, providing assistance for injured workers. She worked for Intracorp in ND, and also for Concentra and the Alaris Group in MN. Angie retired in 2011 due to health reasons. Angie has been a member of Phi Mu Sorority since 1964. She traveled yearly with a special group of her sorority sisters for 26 years. Angie enjoyed playing the organ in her country church during high school. During her early marriage, she taught bible class and Sunday school and in her latter years, held a bible study class in her home. Ray and Angie enjoyed spending the winters in Arizona for 6 years until she could no longer travel. They also enjoyed many years of entertaining family and friends around their backyard pool. Angie decided early on that the letters of her illness (ALS) would mean to her (Always Living with my Savior). She is truly now in her eternal home. She is preceded in death by her parents, Gottlieb (Jeff) and Helen (Klima) Steinwand and her brother, Wayne Steinwand. She is survived by her husband, Raymond Peda and her 2 children, Chad Jason Peda and Kari Ann (Peda) Lugo. Memorials can be made to the Angie Peda ALS Memorial Fund. Your donations will enable the Peda family to continue giving in her honor.

Angie&#8217;s service can be viewed here: https://youtu.be/JcvVHMJZ4hI Angela Marie Steinwand Peda went to meet her Savior on August 2, 2021. She completed her long journey with ALS which was diagnosed in December of 2010. Angela was born... View Obituary & Service Information

The family of Angela Marie Peda created this Life Tributes page to make it easy to share your memories.

Send flowers to the Peda family.