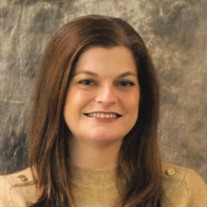 Andresa's Funeral Service can be viewed here: https://vimeo.com/468559568 It is with deep sadness and sorrow that we share that our dear Andresa passed away Friday, October 9th. The transplanted heart she received nine years ago had weakened, and we believe she died from a massive heart attack. Andresa Kirstin Carlson was born on October 13, 1987, at MeritCare Hospital to Mary and David Carlson. She spent her first two years in Grand Forks while her dad pursued medical school. The family moved to Bismarck, where Grandma and Grandpa Carlson lived - many special fun times were enjoyed. For David’s fourth year of medical school, they returned to Fargo, where Grandma and Grandpa Tollefson and aunties Judy, Becki, and Martha and her cousins lived. Many glorious hours of family meals, Rummikub, piano recitals, choir concerts, and much love and joy were shared. During high school, she started working at Widman’s with David and Carol Kennedy - a job she thoroughly loved - and found another network of support and respect. She graduated from Fargo South in 2006 and started her college adventure at Concordia College in Moorhead. There she developed many strong and important relationships with faculty and staff. On August 1, 2010, she started UND School of Medicine in spite of suffering since she was three months old from dilated cardiomyopathy, a serious progressive disease. She was forced to drop out of medical school in February 2011 and received her heart transplant at St. Mary’s Hospital in Rochester on March 1, 2011. Then started a saga of recovery and rejection and a regiment of meds. Andresa returned to medical school and graduated in May 2016. She spent an Internal Medicine internship year in Reno, NV, and then moved to Newark, New Jersey, to complete an Anesthesiology residency at Rutgers. In Reno and Newark, she was known for her expertise, composure, willingness to advocate for her fellow students and patients, her deep intellect, and compassionate empathy. Andresa’s dream job arrived with her contract with Minneapolis Anesthesiology Partners, a move to Minneapolis and her position at Abbott Northwestern, supervising multiple surgeries daily. She established herself in this short time as a physician committed to her patients and a true professional in her field. Andresa’s brilliance was evident, and her endless creativity took many forms - from singing in school groups and being selected for a national choir to taking part in an opera and a musical during high school. At Lincoln Elementary, she and her sister Elisa took part in Odyssey of the Mind, going to the world competition in 2001. Andresa gardened at her dad’s lake cabin and assisted with building a deck, mastering the use of a saw and drill. Her creativity found a new outlet when living for four months at the transplant house with her sisters Shanna and Elisa, mother Mary and father David, aunt Darlys, cousin Janelle, brother-in-law Yoran, and buddy Mary Edmister. She baked bread and rolls daily and started putting together her own cookbook. The world has lost a true light of integrity, kindness, intelligence, and skill. We have lost our beloved daughter, granddaughter, sister, niece, cousin, colleague, and friend. She is survived by mother Mary Stenson (Fargo, ND) (Bob and his kids Andrea, Rob and David), father David Carlson (Reno, NV) (Linda and her kids Tara, Ryan, and Evan), sisters Shanna Carlson (Minneapolis, MN) (Osvaldo) and Elisa Marchione (Heber, UT) (Yoran), grandfather Carrol Tollefson (Fargo), grandmother Jennie Carlson (Reno), aunts Judy Coughlin (Fargo), Becki Tollefson (Fargo), Martha Tollefson (Tucson), Darlys Carlson-MacDonald (Abbottsford) (Marvin), cousins Mark Coughlin (Fargo), Julie Becker (Washburn) (Donnie) and their daughter Kiera (Washburn), Janelle Kistner (Sabin) (Lance) and their daughter Ava (Sabin), Nathan MacDonald (Victoria) (Candyce) and their sons Julian and Theodore (Victoria), and Christopher MacDonald (Victoria) (Alissa). She is preceded in death by her sister Melissa, maternal grandmother Helen Tollefson, and paternal grandfather Norris Carlson. Services will be held at Hanson-Runsvold in Fargo. Dr. Dreh would insist that you wear a mask and wash your hands, and we will practice social distancing. Memorials can be made to LifeSource (life-source.org) and American Heart Association (www2.heart.org).

Andresa's Funeral Service can be viewed here: https://vimeo.com/468559568 It is with deep sadness and sorrow that we share that our dear Andresa passed away Friday, October 9th. The transplanted heart she received nine years ago had weakened,... View Obituary & Service Information

The family of Andresa Kirstin Carlson MD created this Life Tributes page to make it easy to share your memories.