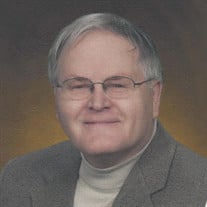 Alvin's memorial service livestream can be viewed here: https://vimeo.com/659019680 View Alvin's Tribute Video here: https://www.tributeslides.com/tributes/show/HX3RPTY2LH2HND2G Alvin Dale Kadrmas, 80, Fargo, ND, passed away suddenly on December 16, 2021, at Sanford Medical Center, surrounded by family. Alvin was born in Dickinson, ND, on December 14, 1941, the 4th of 9 children. He grew up on the family farm northeast of Dickinson and attended the Tabor #2 School District. He graduated from Dickinson High School in 1959. He married Judith Swensrud on January 25, 1967, in Dickinson. He worked for EW Braasch, Carlson Homes, and General Steel & Supply and was a longtime member of the Eagles Club. After the family moved to Bismarck in 1987, Alvin worked for United Building Centers and House of Color. He retired in 2003, then moved to Fargo in 2011 to be near his grandchildren. He was a good, honest, trustworthy, and hard-working man of integrity. Quiet, humble, methodical, and precise are words that describe him. He was a list-maker, a doer of things, and a family man. In his younger years, Alvin enjoyed hunting, bowling, and playing cards for quarters. Later, he spent time traveling with his wife and curating his collection of John Deere toy tractors and memorabilia. He was an avid coin collector and loved spending time with his five grandchildren. Papa Alvin always had time to read a book and always had fruit snacks in his pocket. He had suffered from ill-health in recent years but didn’t complain. He lit up the room with his dad jokes. When he was happiest, he’d be singing, whistling, or humming a country & western tune. He is survived and dearly missed by his wife of nearly 55 years, Judith, Fargo, ND. His children: JoLee (Bryce) Curry, Danville IN; Jonathan (Sara), Fargo ND and grandchildren Theodore and Patrick; Joshua (Amanda) Fargo ND and grandchildren Zoey, Quinn, and Mallory. His siblings: Eileen, Beatrice, Edwin, Jeannie, Gordon, Virginia, Judy, and Doreen, and scores of nephews, nieces, cousins, and in-laws. He was preceded in death by his parents Edward and Lillian Kadrmas.

The family of Alvin Kadrmas created this Life Tributes page to make it easy to share your memories.

Send flowers to the Kadrmas family.