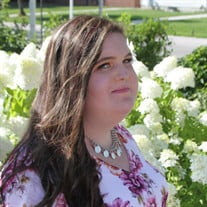 Addison's Funeral Service can be viewed here: https://youtu.be/yjHbIWw62is Addison's Prayer Service can be viewed here: https://vimeo.com/681661413 Here is a link to view Addison's Tribute Video: https://www.tributeslides.com/tributes/show/FZ9K4TZGHNNQ8NZF Addison (Addy) Mae Fell, 20, began her eternal rest Thursday, February 17, 2022, at Sanford Medical Center, Fargo, after losing her brave struggle against limb-girdle muscular dystrophy, with the love and support of her family by her side. Addy began her life on Monday, December 3, 2001, the daughter of Becky Wilson and Bruce Fell in Fargo, ND. She grew up in Argusville, ND, where she attended Northern Cass School. As a youth, Addy enjoyed being a Brownie Scout. She also developed a feel for beauty, ruining her great grandmother’s lipstick in her discovery of beauty products. Prior to her first year of high school, Addy moved from Argusville, ND, to Fargo, ND, with her mother and brother Clay. Addy would attend West Fargo Sheyenne High School. During her time at West Fargo Sheyenne, Addy blossomed into a multifaceted performer. Addy participated in various singing groups that led to her being selected to the NDSU Honor Choir and twice being selected to the UND Honor Choir. For her senior year, with the respect of her peers, Addy was elected president of the choir. Addy performed in a production of the musical, “Titanic”, with both speaking and singing parts. As for speaking, Addy also earned her extracurricular letter for her work with the Speech and Debate team, where she placed numerous times in events. As for being multifaceted, Addy even performed a short comedy routine during a cabaret night. Addy wasn’t just a vocal performer, she also excelled as a visual artist. She developed her skills in both drawing and painting. Her love of mermaids was often her source material. Many of Addy’s senior year activities were cut short due to the onset of the COVID 19 outbreak. However, Addy’s class was able to participate in commencement activities. Addy sang one last time as a Sheyenne Mustang during her class of 2020 graduation ceremony. Outside of her school activities, Addy refused to let her diagnosis define her. She was active with HOPE Inc., an organization that specializes in activities for people with mobility challenges. Through HOPE Inc., Addy would participate in various activities including, fashion shows and play productions. For eight years, she also attended MDA camp. For one week a year, Addy could be around peers that she didn’t need to explain herself to. She considered that week of camp, the best week of her year! Following her high school graduation, Addy attended the Vocation Training Center (VTC) where she continued to showcase her artistry. She worked as an artist but also taught art skills to other VTC attendees. Addy would write as an advocate for people with disabilities. Addy also volunteered at MDA fundraisers on behalf of people with muscular dystrophy. Addy is a lifelong member of Beautiful Savior Lutheran Church. She was baptized in her faith on January 27, 2002. Addy completed confirmation April 30, 2017. Addy also sang in the youth praise band. In honor of both of her great grandfathers' service to our nation, Addy is also a member of the American Legion Auxiliary Post #88. Addy also sang our country’s national anthem at numerous events. Addy is survived by her: mother, Becky and stepfather, Jason Wilson; father, Bruce; brothers, Tavis and Clay; sister, Cordalynn; and stepbrother, Cade Wilson; grandparents, Paul and Donna Berg and Juanita Fell; step grandparents, James and Debra Wilson; great grandmother, Mary Berg; uncles, Todd (Lisa) Berg, Tim (Staci) Berg and Allen (Anna Jo) Berg and aunt, Eursla Wolfe; cousins, Jacob, Lane, Wade, Hunter, Dakota and River Berg. Addy was welcomed into the Light of our Lord by her: uncle Clayton Fell, grandfather Bruce E. Fell, great grandparents Reuben and Adeline Brownlee and Alvin Berg. Funeral Service: 11am, Friday, February 25, 2022 at Beautiful Savior Lutheran Church, Fargo, ND, with a visitation one hour prior. Prayer Service: 7pm, Thursday, February 24, 2022 at Hanson-Runsvold Funeral Home, Fargo, ND with a visitation from 5-7pm. Arrangements entrusted to Hanson-Runsvold Funeral Home – Fargo, ND

The family of Addison "Addy" Mae Fell created this Life Tributes page to make it easy to share your memories.

Send flowers to the Fell family.