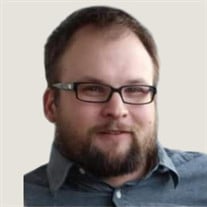 Adam's service will be livestreamed here at 7pm, Wed. February 10, 2021 and can be viewed later as well: https://vimeo.com/509830474 Adam's Tribute Video can been seen and copies ordered here: https://www.tributeslides.com/tributes/show/774DZWMTNB5GTYLK Adam Erickson, 38, of Fargo, ND, passed away after a two-year fight with cancer on Saturday, February 6, 2021 at his home under the care of Hospice of the Red River Valley. Adam Alexander Erickson was born October 19, 1982 in Davenport, IA to Duane and Luanne (Nelson) Erickson. In 1986, they moved to Grand Rapids, MI with his parents and older brother, Nick, where he saw the Mighty Ducks movie and decided he would play hockey. By ninth grade he was on the junior varsity hockey team at Forest Hills Central. In 1997 they moved to St. Brieux, Saskatchewan, Canada where he continued his hockey career and graduated from high school in 2001. In 2001, he moved to Wahpeton, ND to attend ND State College of Science where he earned Master Machinist and Automated Manufacturing degrees. While he was attending college he met Amanda Swedlund while singing karaoke. In 2005, Adam and Amanda began their adventure together in Fargo, and were married on September 30, 2006. Adam worked various jobs, including his dream job of driving the Zamboni at the Urban Plains Center, before starting his most recent work as a warehouse manager and service technician at DMI Car and Truck Wash Systems in 2014. Adam and Amanda were blessed with their daughter, Morgan, on April 22, 2008 and son, Devin, on September 27, 2012. Adam enjoyed his special father-daughter days at the hot dog place with the tall tall trees, coaching his son, Devin, in hockey, and taking his dog, Winter (Husky), for their urban mushing excursions. Adam enjoyed attending concerts, spending time with his friends, including attending ManCamp and cheering for his Red Wings. He was a loyal friend and maintained friendships from all the places he lived. Adam was also well-prepared for the Zombie Apocolypse. Adam is survived by his wife, Amanda; daughter, Morgan; son, Devin; parents, Duane and Luanne, Natchez, MS; brother, Nick (Stephanie) Erickson, New Prague, MN; nephew, Jayden; niece, Maura; parents-in-law, Dan and Wendy Swedlund, Breckenridge, MN; brother-in-law, Derrick Swedlund, Lake Metigoshe State Park, ND; and many aunts, uncles, and cousins. He was preceded in death by his grandparents, Irvin and Dorothy Nelson, and Marlowe and Yvonne Erickson; aunt, Diane; uncle, Don; and dear friend, Jamie Hendrickson. A private memorial service will be held at 7pm, Wednesday, February 10, 2021 and will be livestreamed at www.hansonrunsvold.com A celebration of Adams life will be held at a later date.

The family of Adam Alexander Erickson created this Life Tributes page to make it easy to share your memories.

Adam&#39;s service will be livestreamed here at 7pm, Wed. February...

Send flowers to the Erickson family.